Christmas is coming closer, so here is my contribution to put you in the right mood.

It is a blog hitcounter, that rings a bell. Literally. It puts a smile on your face, every time someone hits your blog. And it is a great way to annoy your colleages or your girl friend.

It consists of an Arduino board, a bell, a servo and a couple of lines of code in c, python and php. 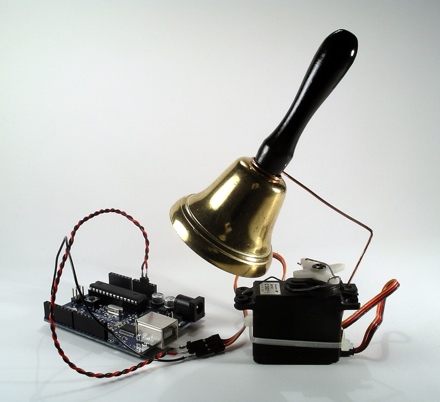 So what is needed?

The bell is held by a strong paperclip. The small paperclip is used to form a kind of arm that is atached to the servo motor. 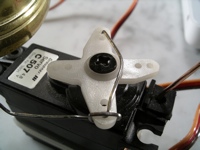 There is no real schematic. Just attach the servo motor to the Arduino. The servo has three wires:

The red and the brown one are attached to the according pins on the Arduino. The orange one is wired to pin 2. It will signal the servo in which direction to turn. 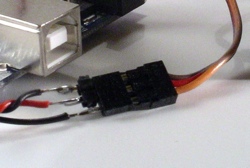 The software stack has three parts. First part is the counter embedded in my blog. Second is the glue code, running on my mac to fetch the counter and to update the Arduino. Third is the Arduino sketch itself to control the servo motor.

This is a small php snippet to write a counter into a text file. I have included it into one of my wordpress templates. That’s not very smart, but for now my traffic is not that high so this should not be a problem.

Here is the second part, the python snippet to fetch the counter. It opens a connection to the saved hitcounter.txt and loads the content, which is the actual value of the counter. This counter is compared with the previous fetched value. If it differs, than it has an incident to report. The delta is written as byte to the serial port and sent to the Arduino. That is done every ten seconds.

Last part is the Arduino sketch. It is mainly based on the code that I found at the ITP Physical Computing. In the loop you see the reading of the delta value provided by the python script. If there are some rings to perform, a little state machine takes control of how far and when to move the servo arm. The servo motor is controlled with PWM, pulse width modulation. That’s the last part of the sketch. How far the servo arm turns can be adjusted with the min- and maxPulse values.

It is the first time, that I built something, that has moving parts. That’s my first step to bridge the gap between the virtual and the real world. And it was really easy, the code is straight forward. Also most of the parts were in my trash bin, except the bell. Putting everything together and waiting for someone to hit my blog was fun. 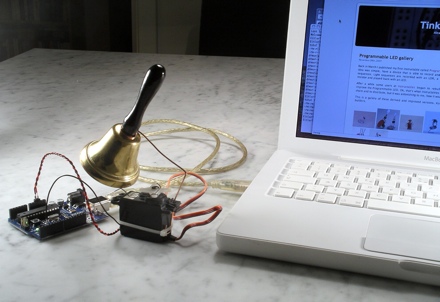 Ok, time for some action.

BTW, the fabulous soundtrack used in this video is free and can be found here: Wikipedia Jingle Bells, performed by the Festival Speech Synthesis System‘s “singing-mode”.