Thilo and I have been in Berlin for the last three days from 27th to the 29th, attending to the 24c3. It has been the first time for me beeing there. The 24c3 is one of the biggest events in Germany and Europe where geeks and hackers get together to talk, to hack and to have fun. It is a pitty, that I found out that late that there is such a cool event every year taking place only some hundred kilometers away. Anyway, I will be there again next year. 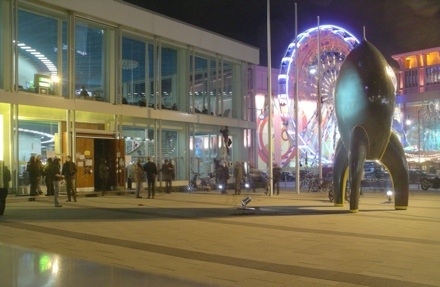 Most of the talks were well prepared but some were not. That’s a shame, as it may reflect to the subject of the talk. Here are some of the good ones that I listened to:

Paparazzi – The Free Autopilot
Antoine Drouin and Martin MÃ¼ller talked about building your own autonomous unmanned aerial vehicle (UAV). They even presented live how they can control remotely a UAV in Hildesheim. Very cool.

Design Noir
Lady Ada presented about projects that are trying

Examples are the TV-B-Gone to switch off unwanted public TVs and a low power RF-jammer which enables you to block GSM phones around you.

Why Silicon-Based Security is still that hard: Deconstructing Xbox 360 Security
Felix Domke and Michael Steil told us how hard it is to get the security right and how the Xbox 360 hack actually works. Wow, these guys are cool.

After the timebased attack to memcmp, the rest was straight forward.

Ah…, ok.
At the end they even presented the first hack for the Wii.

Toying with barcodes
FX of Phenoelit presented about the vulnerability of barcodes. Many systems do not implement any security in their workflow. Often it is only checked if the scanner can read the code at all. Hair-raising.

DIY Survival
The one and only Bre Pettis held an talk about how to survive the apocalypse. What tools and equipment would you need. Not to be taken too seriously. I enjoyed it very much, Bre is a real entertainer.

All 24c3 talks are available in various formats. I am not sure, when the servers will recover, at the moment you won’t see anything.

It was one of the highlights of this year. I recommend it to everyone who is interested into hacking, making and meeting cool people. And drinking Club Mate, of course.