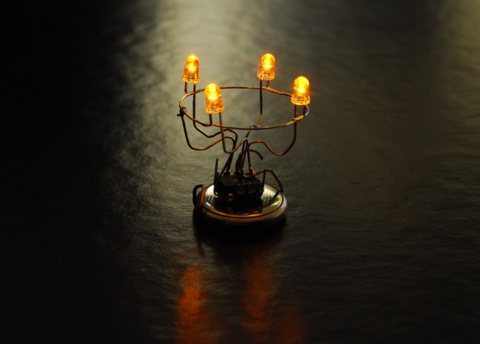 It’s Advent season. And what do you do to let your geek shine? An LED Advent wreath of course.

The idea came to me after seeing Sprite’s minimalistic version of the Hackaday’s Flickering LED circuit. It’s a simple circuit that flickers LEDs and detects darkness. I thought that this could make a great little Advent wreath. My version should have 4 LEDs and should be support first, second, third and fourth Advent.

There are no current limiting resistors in this circuit. Normally operating LEDs without them is not advisable because the LEDs will get damaged. But under certain conditions the resistors can be left out. For more on this topic, see Sprite’s computation or mine here.

How does it work 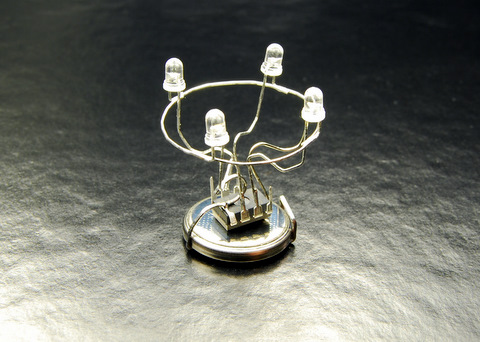 The nice thing about this circuit is, that it needs no special components to detect darkness. It uses an LED for that. An LED is also a photodiode that can detect light of the same wavelength it emits. See here for more details. Sprite used an available ADC of the ATtiny13 instead of the “Reverse Bias” method.

The software is heavily based on Sprite’s version. Things I’ve changed:

After power up, the watchdog gets enabled to generate an interrupt every two seconds. Then the current mode (0-3) is read from EEPROM, incremented and stored back. Then the endless loop is entered, where random values are used to flicker the LEDs. The ISR checks the ambient lighting and if it is higher than a certain level, sets a sleep flag. This flag is monitored in the main loop. If set it sends the controller in to power down mode to save battery power. The next interrupt will wake up the main loop.

This circuit is soldered in “free form”, so no PCBs. It takes some time to get it done but it’s worth it.
All cathodes of the LEDs are connected to form the ring. The anodes are bent inwards to be soldered to pin 2, 3, 6 and 7 of the ATtiny13. A short piece of wire is connected to the common cathode and soldered to the GND pin.

If you make one, please let me know. Send me a picture or post it on the tinkerlog flickr pool.